Our third Clandestine gathering took place last Saturday with a Cuban inspired menu. The dining room was prepped with old Cuban posters whilst Compay Segundo and Ibrahim Ferrer were singing in the background. 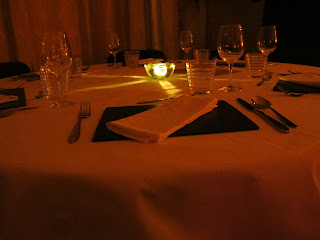 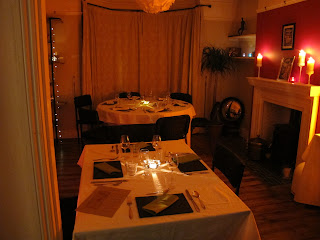 We had a 8 courses menu this time as some dishes were dismissed but other added after our dry run. 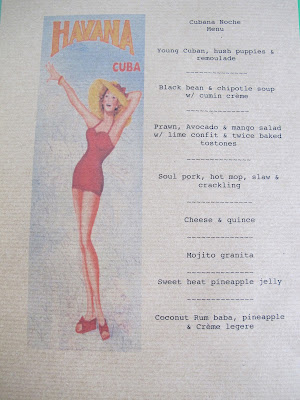 On arrival, the guests were greeted with a "Young Cuban", a warm cocktail of orange,orange pekoe,agave syrup and home-spiced rum. This was served along with some Hush Puppies with remoulade sauce. This was closely followed by the first surprise course, a rich black bean and chipotle soup with a cumin cream.

The starter was an avocado, prawn and mango salad with lime confit, mango dressing and twice baked tostones. The prawns were cooked "sous vide" to keep the texture soft which balanced well with the crispy baked plantain.

Our soul pork in homemade brioche was served with cole slaw and crackling, jugs of  hot mop sauce were on the tables to pour on the brioche .
The palate cleanser this time was a mojito granita, served with an extra shot of barbadian rum.
We then served the cheese course, a salty but delicate spanish goat's cheese with homemade membrillo.

The pre-dessert was a sweet heat pineapple jelly which was then followed by a coconut rum baba served with pineapple, a light cream and an extra shot of dark rum.
Coffee and more rum followed for the courageous.

A big thank you to Luca, who helped out tremendously in the kitchen, to Drew from the Shelford Deli for helping us pick the cheese course, to Barker bros in Shelford  for the melt in the mouth pork and Noel Young Wines for the continuous supply of rum.

Watch this space as our next event will be during the EAT CAMBRIDGE week.